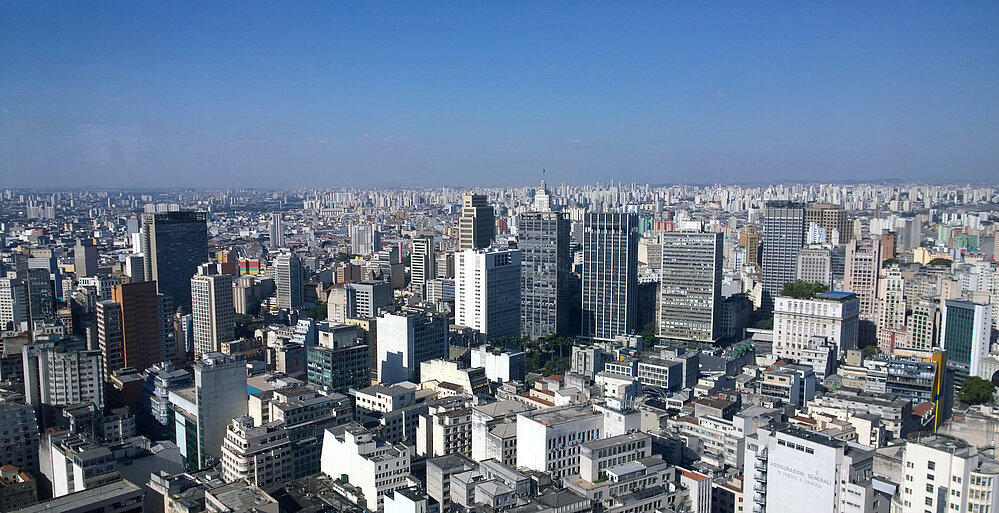 The State of São Paulo is one of the 27 states of Brazil and is named after Saint Paul of Tarsus. As the richest Brazilian state and a major industrial complex, often dubbed the "locomotive of Brazil", the state is responsible for 33.9% of the Brazilian GDP. São Paulo also has the second highest Human Development Index (HDI) and GDP per capita, the fourth lowest infant mortality rate, the third highest life expectancy, and the third lowest rate of illiteracy among the federative units of Brazil, being by far, the safest state in the country. The homicide rate is 3.8 per 100 thousand as of 2018, almost 1/4 of Brazilian rate. São Paulo alone is richer than Argentina, Uruguay, Paraguay and Bolivia combined. If São Paulo were an independent country, its nominal GDP would be ranked among the top 20 in the world (2010 estimate). The economy of São Paulo State is the most developed in Brazil.[14]

With more than 45 million inhabitants in 2019, São Paulo is the most populous Brazilian state, the most populous national subdivision in the Americas, and the third most populous political unit of South America, surpassed only by the rest of the Brazilian Federation and Colombia. The local population is one of the most diverse in the country and descended mostly from Italians, who began immigrating to the country in the late 19th century; of the Portuguese, who colonized Brazil and installed the first European settlements in the region; indigenous peoples, a large number of distinct ethnic groups; Africans, who were brought from Africa as slaves in the colonial era and migrants from other regions of the country. In addition, Arabs, Germans, Spanish, Japanese, Chinese, and Greeks also are present in the ethnic composition of the local population.

The City São Paulo is a municipality in the Southeast Region of Brazil. The metropolis is an alpha global city and the most populous city in Brazil, the Western Hemisphere and the Southern Hemisphere, besides being the largest Portuguese-speaking city in the world. The municipality is also the Earth's 11th largest city proper by population. The city is the capital of the surrounding state of São Paulo, one of the most populous and wealthiest states in Brazil. It exerts strong international influences in commerce, finance, arts and entertainment. The name of the city honors the Apostle, Saint Paul of Tarsus. The city's metropolitan area, the Greater São Paulo, ranks as the most populous in Brazil and the 4th most populous on Earth. The process of conurbation between the metropolitan areas located around the Greater São Paulo (Campinas, Santos, Sorocaba and the Paraíba Valley) created the São Paulo Macrometropolis, a megalopolis with more than 30 million inhabitants, one of the most populous urban agglomerations in the world.

Having the largest economy by GDP in Latin America and the Southern Hemisphere, the city is home to the São Paulo Stock Exchange. Paulista Avenue is the economic core of São Paulo. The city has the 10th largest GDP in the world, representing alone 10.7% of all Brazilian GDP and 36% of the production of goods and services in the state of São Paulo, being home to 63% of established multinationals in Brazil, and has been responsible for 28% of the national scientific production in 2005. With a GDP of US$477 billion, the São Paulo city alone would have ranked 26th globally compared with countries by 2017 estimates.

Many international students may need some consular services during their stay in Brazil. Reasons to contact your Consulate may vary from situation to situation, but some of them are: General Elections, Passport Loss, information about the community of your country in Brazil and so on. HERE is possible to find the list of all foreign diplomatic offices in the city of São Paulo.

Consulate General of the Kingdom og Belgium in São Paulo

Consulate General of the Kingdom of Spain in São Paulo

Consulate General of the United States of America São Paulo

Consulate General of the Italian Republic in São Paulo

Consulate General of the Portuguese Republic in São Paulo

In the city of São Paulo, people daily use the public transportation system. You can find the map of the Subway system HERE.